A Tribute to Albert Finney + New Music From The UK

Posted on February 9, 2019 by normanbradio 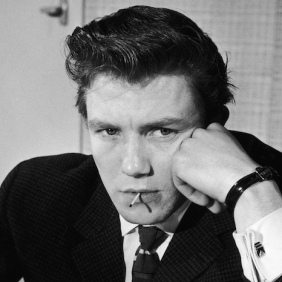 “The death of Albert Finney could mark the end of a certain generation of British actors.” Says film and media critic, Bob Ross in our tribute to the highly-rated star of stage, screen, and TV, who sadly died a few days ago on February 7. Finney came to prominence in the era of the “Angry Young Men”. It was a period that transformed the face of British theater and cinema from the 1950s. Powerfully built, Finney had the resonant voice beloved by earlier generations of stage actors. Born in Salford, Lancashire, May 1936, Finney’s father was a bookmaker. Always proud of his working-class roots, he once said, “It’s part of you, it’s in your blood.” Although he had acquired a taste for acting while still at Salford Grammar School where he won a scholarship to The Royal Academy of Dramatic Art. He worked first with Birmingham Repertory Theatre before moving on to the Old Vic and National Theatre. His first London stage appearance was in 1958 in Jane Arden’s The Party, which was directed by Charles Laughton, who also starred. A year later, the young Finney was at Stratford where he replaced an ill Laurence Olivier in the role of Coriolanus. In 1960, he appeared alongside Olivier in his first film, The Entertainer, directed by Tony Richardson. Based on a play by John Osborne, it was an example of a new gritty style of British film-making that became known as kitchen-sink drama. Its heroes were invariably working-class, the backdrops often that of northern England, and it explored themes of social alienation. Finney’s next film, Saturday Night and Sunday Morning, gave him a starring role as a young factory worker who was disillusioned with his lot. The plot, based on a novel by Alan Sillitoe, featured extramarital sex and abortion, earning it an X-certificate from the British Board of Film Censors. He was approached to play Lawrence of Arabia in David Lean’s film but, after going through a four-day screen test, Finney decided not to take the role that eventually went to Peter O’Toole. Instead, he teamed up with Tony Richardson again for Tom Jones, an adaptation of Henry Fielding’s bawdy 18th Century novel. Tom Jones made Finney an international star and he was voted one of the top ten British actors of 1963 by cinema owners. In the 1967 film Charlie Bubbles, which Finney also directed, he played a writer returning to his northern roots after becoming successful in London. In one scene, Finney’s character is pictured driving his gold Rolls Royce through the crumbling streets of his native Salford. He also proved he could sing, first in the title role of the 1970 musical film Scrooge and then in the 1982 film version of the Broadway musical Annie. In 1974, he played the pedantic Hercule Poirot in the film Murder on the Orient Express. He had a magnetic presence off-screen too. His lovers included Joan Baez, Carly Simon, Billie Whitelaw, Jacqueline Bisset, Shelley Winters, and Diana Quick. In 1957, he married Jane Wenham, with whom he had a son. The couple divorced just five years later. In 1970, he married the French actress Anouk Aimee. Later in life, he settled down with Penne Delmarche and admitted to only two vices – wine and horseracing. He owned several racehorses, stabled in America. He had kidney cancer diagnosed in 2007, and he disappeared from public view but returned with roles in The Bourne Ultimatum and James Bond film Skyfall. He largely ignored the celebrity lifestyle and refused becoming CBE in 1980 and a knight in 2000. “I think the Sir thing slightly perpetuates one of our diseases in England, which is snobbery,” he said at the time. “And it also helps keep us ‘quaint’, which I’m not a great fan of.”

Also in this edition of Life Elsewhere, three new singles from the United Kingdom. First up, a four-piece band who prefer their name in all caps, ISLAND with All In My Head. On our show, you’ll hear instrumental and vocal versions from the London-based band. If you don’t understand the song, you’re not alone, this is what frontman, Rollo Doherty says about their new single, “It’s weird, we didn’t really understand the song when we started writing it but we liked that about it, we didn’t try to understand it. The lyrics just take that idea and put it through a blender. Weirdness just mixed up with more weirdness. Just like what’s in my head.” Next up, a young gentleman we have been raving about for around two years now, the very talented, Leaone. The singer-songwriter was in the US a few months back and had the opportunity to record a few cuts in a Brooklyn studio with producer, Tom Marsh. The results are what Leaone refers to as “The Brooklyn Sessions”, Prairie Fire is his latest single. Our third new release is from the fine folks associated with Gad Whip. Lee who tinkers around in his Yuba Recording Studio sent us a new single, Now, a mesmerizing track that we have had on repeat play for the last few days. Yubamusic is the moniker Lee is using for this release. If we can be of any encouragement at all, we’d like to hear more cuts in this vein from Yubamusic.