The Poet & The Singer-Songwriters 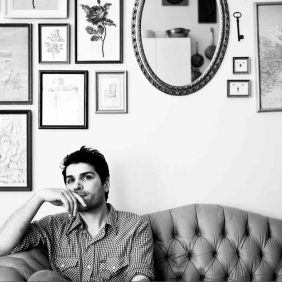 “When you mention poetry, you get a kind of look from some people that says, ugh!” Norman B suggests to Erin Robinsong. It’s the beginning of a conversation with the Toronto-based poet and craftsman book maker. Erin collaborated with Life Elsewhere favorite, (also Toronto-based), singer-songwriter, Barzin

on his limited edition book, Something I Have Not Done Is Following Me. “I know that look,” agrees Erin, adding, “I think poetry is surviving at the moment in some circles, but I think it’s not surviving in mainstream culture.” Erin goes on to explain that all art challenges, and perhaps poetry being the most difficult to comprehend. It’s an engaging conversation, with Erin Robinsong reading one of Barzin‘s poems and the reserved songwriter explaining he feels more like a writer than a musician, “I feel a closeness to writers and the world of writing than to music.” He says humbly. Thankfully, Barzin has not allowed those feelings stop him from crafting the exquisite music we love so much at Life Elsewhere.

This week’s Hit That Never was selected by Sofia, who makes mention of the state of our world, right now. She suggests a song that not only sounds “cool” but also makes us “think”. We agree and thank Sofia for selecting Hands Of Time

Zuzu is the name of a talented British musician, Norman B has been raving on about for the last year. Finally, we managed to catch up with this spirited singer-songwriter for a down-to-earth conversation. Zuzu enthuses about her mixed heritage and musical influences, which are diverse, citing Robert Johnson

to The Cocteau Twins

. She is not afraid to say what she feels and projects an unabashed honesty, often rare when the spotlight is focussed on an emerging talent. To date, Zuzu has released just two tracks, both of which have compelled Norman B to predict her debut album, due out in 2016, will be a treat to look forward to. Make sure you don’t miss Norman B’s conversation with Zuzu in the next edition of Life Elsewhere.