The Girl To City Conversation With Amy Rigby

When I lived on East 4th Street, the staircase had been clogged twice a month with tenants waiting for the mailman to bring disability and welfare checks. My 14th Street neighbors were more of a mix of writers and musicians, the employed and the unemployable. Above and below and on either side of me, people were reading books, painting, making clothes. I also saw a lot of them hustling to the subway or bus in the morning dressed in business attire, off to do their day jobs. I won’t be like that, I thought. I’m only tempting until I’m successful at music. Then I won’t have to work another job.

Amy Rigby, Girl To City – A Memoir – Summer Of My Wasted Youth

In this short, brilliantly written example from Amy Rigby’s memoir, you cannot ignore her raw honesty. Even describing humdrum, day-to-day scenarios she doesn’t wander off into fanciful wordplay. Instead, Amy has a marvelous knack for not only conjuring up the scene but also her feelings at that moment. It’s a powerful skill, she modestly acknowledges. “I write better than I say it.” She announces with a slight giggle. Conversing with Amy is always a treat because you never know what tangent you’ll go in. Reading Girl To City is not unlike having a private conversation with the acclaimed singer-songwriter. She speaks directly to you, sometimes wistfully: 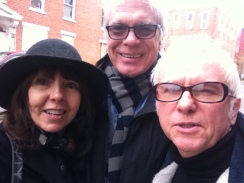 And she always speaks with a wink in her eye. Never jaded, often knowing and occasionally with a tartness that catches the reader by surprise. Her memoir is packed full of information, details, names, cultural references, a history of rock and roll as seen through Amy’s almost always bright-eyed vision. There have been a lot of memoirs from the rock fraternity, Girl To City deserves its own unique category, as Lenny Kaye says, “Amy Rigby writes the way she performs and sings, laced with insight, humor, self-awareness, and above all, heart”.

During the conversation, Norman B asked Amy to select some music to play during the show. She decided on two cuts from A One Way Ticket To My Life, a companion album to her book, Girl To City, featuring unreleased tracks and demos. Plus she requested we play, the Summer Of My Wasted Youth from her 1998 album, Middlescence.