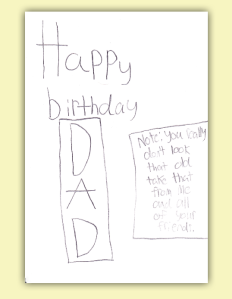 A big week at Life Elsewhere headquarters! A record number of listeners to our Podcast via Stitcher and WMNF, plus massive amounts of hits at this site, from Mongolia to Kuwait and Chile to Finland. If that wasn’t enough to keep us busy, it was also Norman B’s birthday which generated non-stop email and snail-mail salutations. The cake, the balloons and festive paraphernalia are gradually being pushed to one side as we concentrate on the Memorial Day edition of Life Elsewhere. One birthday card looks like it will permanently take pride of place on Norman B’s desk. It’s a card from his son James (pictured left), with a sentiment we all agree with.

Impressed with all the generous birthday messages and the ever-growing numbers of subscribers and listeners to Life Elsewhere, Norman B set about saying “Thank You” by making an exclusive mix for you to download. “I decided to give something back to all the wonderful supporters of Life Elsewhere“ said Norman B, adding “I selected some my all-time favorite and collectable reggae tracks!” The playlist follows and the download link is at the bottom of the page.

(Apologies for the surface noise, this track was taken directly from my well-worn copy). This track first appeared on a 10” ep on the Virgin Front Line imprint, apparently now a rare find. I bought my copy when it was released in 1978, before ever hearing it. The cover caught my attention as I perused the slim reggae bin at the original Virgin Records shop in London. I played that slight piece of vinyl again and again and almost wore it out. It moved me to such a degree I remember playing it repeatedly one night for my opinionated yet terribly smart friend (and sadly departed) Ken, who finally shouted at me, “Can you give that bloody thing a rest?!” And with that he promptly put on The Stranglers.

B-side of “San San” an Upsetters’ 7” from 1974 produced by the original Upsetter, Lee Perry

on the Count Shelly imprint. Very rare find if you are lucky track down this gem.

This track most likely can be found on various compilations like almost all of reggae tracks recorded in Jamaica throughout the 70’s and 80’s. The compilation lists go on and on and it has become almost impossible to keep up with who released what, when and where. I first discovered “Hold On” on the album “Johnny Clarke

Jah Walton – Touch Her Where She Want It Most

Now here is a fine example of the conundrum of reggae…truth and rights vs. slackness…or…an overindulgence of a debatable religious idea vs. downright blatant sexual boasting. Mr. Walton aka Joseph Cotton manages to mix up both idioms in the short space of one album. The first track “Stay A Your Yard And Praise God” sets a seemingly righteous tone, which abruptly changes with the title track “Touch Her Where She Want It Most”. You certainly don’t have to decipher the lyrics to understand what Mr. Cotton is on about. And just to bolster his predilection, he follows with  “Tender Pum Pum”. But it’s the front cover artwork, if you happen to come across it, that may convince you of Jah Walton’s true religion. Recorded in 1981 at Channel One

and produced by Phil Pratt

Earl Anthony Robinson made no bones about where his interests lay, with album titles like “Slackest LP” and “12″ of Pleasure

”. I happen to own a cassette recording of him toasting with his own Echo Tone Hi Fi sound system where his graphic boasting was for the time truly original and shocking. This track recorded one year before his premature death in 1980 is from the album “Rocking & Swing

apparently wants to borrow a girlfriend! A rousing disco-mix from the exceptional album “Showcase: Midnight Rock At Channel One” Produced by and featuring Jah Thomas

” and “Hurt So Good”. Unfortunately like many female reggae artists, Ms. Cadogan is best remembered for a just one hit. Her sweet breathy vocal style was well handled by the inimitable Mr. Perry on an album well worth searching for.

ara & Trinity – Don’t Stop Till You Get Enough

True story: I used to play this track, many years ago on Wednesday nights at Tugs, the legendary club in Seattle. When I had the crowd at a fever pitch after a set that involved mixing B52’s

then into The Supremes

I needed something to keep ‘em on the dance floor but also change the pace a little. This 12” disco-mix’s thundering bass-line coupled with the familiarity of the song had everyone in a sweaty throbbing mass on the dance floor. The only trouble was the first evening I was about to play the disc, a not so careful visitor to the dj booth managed to knock the platter to the floor. It was Jamaican pressing and therefore made out of the old thick breakable vinyl…a chunk about one inch across snapped off the edge…the disc was still playable but I had no choice but to cue it up, skipping the opening bars to begin where Mr. Lara says, “Yeah!” It was a huge success and requested again and again. I almost certainly played the record every week for over a year but dancers at Tugs never ever heard the beginning. Thankfully I managed to find a digital version so you can hear the whole wonderful effort intact. Enjoy.

was available for a limited time.