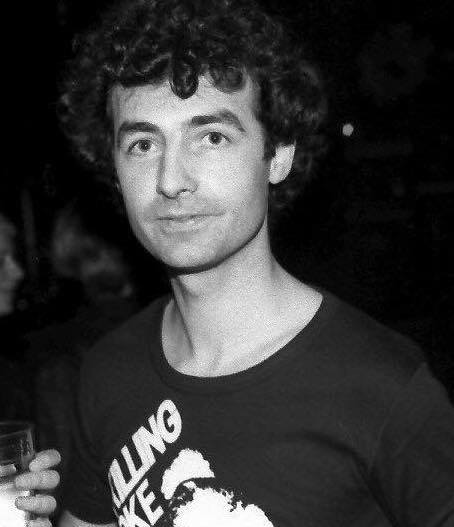 It was late on a dreary afternoon in London, I was jet-lagged after a flight from Seattle. I made my way cautiously from Notting Hill Gate tube station to an address near Ladbroke Grove. Although the area was as familiar as the back of my hand, a lot had changed in the years I had been in America. The birth of Punk had coincided with my departure to the land of the free and the home of the brave. Portobello Road, was just around the corner, where I fondly recalled my days selling hand-painted ties in the market on Saturdays. The area was now awash with spikey-haired youths sporting studded leather jackets, assorted piercings, tattoos and awkwardly-contrived wasted-poses. Many of the once glorious townhomes were now boarded up or in a state of suspended demolition. The impact of Thatcher’s Britain was not looking so good around these parts. Eventually, I found the address, obviously run-down, with some windows missing. The front door, barely on its hinges. Clambering up the filthy, rickety stairs, I remember noting that the aromas of piss, greasy food, vomit and ganja really don’t mix well. I discovered a door with a hastily scribbled note, that read, “Malicious Damage is here and th…” The rest was ripped off, leaving visitors guessing.  After knocking on the door many times, it creaked open and a wobbly head with disastrous white-boy dreads appeared and inquired as to my reason for “Fuckin’ banging on the fuckin’ door, you cunt!”. Dread-head* then brushed passed me, leaving a trail of patchouli essence and harsh cigarette smoke gagging my throat on top of all the other ripe smells. Dready lurched down the hallway, then almost falling down the stairs, managed to call me and possibly every person he ever knew, “Cunts! fuckin’ cunts!” I entered the room, introduced myself to the assorted Muppets gathered in various languorous states. A tousled-haired fellow sitting cross-legged on the floor was wrestling with plastic bags and what looked like record sleeves, only they were about 10 inches square and were apparently one-sided. “Hi, there.” Said the industrious fellow, “I’m Brian, c’mon in.” Beers appeared out of nowhere and copious amounts of hashish were consumed and hours went by. My memory may fail me, but I’m sure that was the time Brian suggested we go eat and we toddled off to South Kensington at my suggestion, to scoff down wonderful Thai food at an old standby of mine, The Bangkok on Bute Street. The enigmatic Ian Lowery. joined us. He and Brian screamed at each other in the cab on the way to the restaurant. It was a serious disagreement over what Plato meant to the 20th century. Later, I was to discover this was standard when hanging out with Brian Taylor. The man not only had an encyclopedic knowledge of music, he was also able to quote Rimbaud or Nietzsche or Freud or whoever you suggested, at will. He was as fluent in Bukowski as he was Shakespeare. He knew the names of cameramen on obscure foreign films. His love of kilims was matched only by his expertise. Brian amazed me. I loved being around him. His brain worked fast and hard and his humor was priceless. That first meeting with Brian Taylor was triggered by a visit to Rough Trade, where Geoff Travis had urged me to check out Brian and a new band he was managing, Killing Joke. Turn To Red was just about to be released and the Peel sessions were still to happen. I scampered back to Seattle with a cardboard box full of wonderful platters. The Killing Joke 10 inch was my treasure. Back in the states, I treated listeners to my show on KRAB the wonders of that record, playing it again and again, week after week. To my knowledge, I was the first person to play Turn To Red on the radio in America. That cemented my friendship with Brian. Each new release on Malicious Damage was rushed over to me, which in those days meant, if Brian could afford the postage, I received a brand new platter in about two weeks after it came off the press. Brian and I communicated by phone occasionally, but mostly by mail. I still have those long, often rambling letters from Brian, documenting the goings on with Killing Joke, and the other acts now on his label. At some point, Brian announced he was coming out to Seattle for a visit. He was having a hard time with some of the members of KJ, he wrote. He was pissed off and needed to get away. Come on over I said, and he did. I remember little of his visit other than we spent many hours drinking and solving the world’s problems while neglecting our own. Time went by, things happened for both of us. We grew older and moved around. In the past few years, we spoke regularly, with Brian in Turkey and me in Florida. Often we agreed after long, long conversations to meet up again. Just a few days ago I mentioned to Brian that I would be in the UK soon. “I’ll be in Brighton.” He offered.  “So will I!” I shouted. It was agreed, we’d meet up, probably drink our fair share and put the world in order and of course, overlook our own problems, again. Rest In Peace Brian. Norman B June 4, 2017

The image of Brian Taylor is courtesy of Frank Jenkinson who managed to capture a time and place with deft skill and determination as illustrated in his self-published book, KILLING JOKE Picture Book 1979

*Dread-head went on to fame and glory.