A Test On Morality In The Age of #MeToo?

“I thought about Lolita in reverse,” announces Liska Jacobs, adding, “why shouldn’t a 43-year-old woman desire a 17-year-old young man?” Her pronouncement sounds provocative, yet Ms. Jacobs’ almost reticent demeanor suggests she hadn’t thought of such a shocking idea. The Worst Kind of Want is Liska’s second novel, the publication day is almost here and she cannot hide her excitement. Her story tells of fastidious Cilla rescued from the bedside of her difficult mother, she dashes off to Rome to keep an eye on her wayward teenage niece. Instead of babysitting, she throws herself into her niece’s youthful, heedless world – drinking, dancing, smoking – relishing in the heady atmosphere of the Italian summer. Then Cilla quickly begins an ever-escalating flirtation with 17-year-old Donato. As she rationalizes her selfish behavior with Donato, the story moves slowly toward disaster. Is Liska Jacobs testing our perspective on morality as she talks of a woman’s desires, death, and sex in the age of #MeToo? Make sure you don’t miss our conversation on the next edition of Life Elsewhere.

Patrick O’Neil – What Do You Do?

In punk’s heyday, Patrick O’Neil worked at the legendary Mabuhay Gardens, San Francisco’s premier punk venue. He then went on to become a roadie and eventually the road manager for Dead Kennedys and Flipper, as well as the Subhumans and T.S.O.L. But that was before his life got totally out of control. O’Neil was a heroin addict for eighteen years, incarcerated for two and a half years, went to two long-term residential rehabs for a total of three years, and has been clean and sober for the last eighteen. His memoir Gun, Needle, Spoon follows his desperately out of control life from punk rock pioneer to his slide into drug abuse and life as an armed robber, all the way through to life in recovery and what it’s like to look back on those times, knowing all the while that he is still under the threat of three strikes, a twenty-five-to-life prison sentence waiting. For our ongoing series, What Do You Do, we asked Patrick to talk about his life now. His forthright answers and obvious passion for life should not be missed. 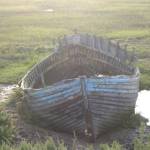 Also in the show, we present the new single from a London-based trio we have been keeping a watchful eye for some time, Richard Price, Roberto Sainz De La Maza and Elisa De Leon who together are known as The Loss Adjusters. Tidy Up The Scene is the latest offering from their forthcoming album. This thankfully, this hard-to-classify group deserves your full attention. And, while you are checking out new notable music, do make sure you listen to Life Elsewhere Music Vol 155 featuring brand new releases from some of our big favorites including, Arlo Parks, Benin City, Neev, Luc Seacroft, Eliza Shaddad, Cate Ferris and more.