A Conversation With Philip Parfitt Part 1

Posted on November 7, 2020 by normanbradio

“Do you think you have a distinctive voice?” Norman B asks British musician, Philip Parfitt. “I don’t really think about it” Parfitt replies, adding “I guess I can’t hear myself.” From the moment the conversation with Phil Parfitt begins his distinctive timbre catches your attention. Is it world-weary, years of smoking and drinking, a theatrical veneer? Or is it the voice of a man who is way beyond fronting a pose? Is this the comfortable voice of a fellow who enjoys a good conversation? A man who has a lot of stories he is eager to share? As you listen, you’ll come to your own conclusion, yet the striking black and white portrait by Jean-Charles Feunteun is as intense as it is mysterious. Phil Parfitt is an open book with many chapters to discover. This will explain why our conversation will air in two parts, but there is far more to learn from a musician, an artist whose ideas cannot all be gathered in one sitting. More conversations with Phil Parfitt are planned for the near future. 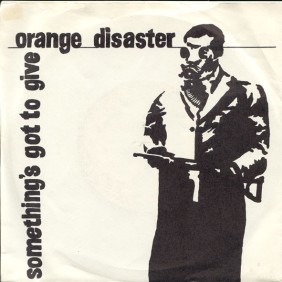 In part one, Phil traces back to being around six-years-old listening to his older brother’s selection of Pretty Things, Rolling Stones, and Kinks records. The lure of rock ’n’ roll was infectious. He knew he wanted to part of it. He jumped in, naively, with Punk and formed Varicose Veins and released the Incredible EP. A limited-edition venture, not by choice but because of limited funds. A record that Phil is loathed to hear these days, despite that collectors are willing to fork out up to 500 pounds for the rare 7” single. His non-de-plume at that time was Henry Crank, but that got old very fast and he morphed into his real name and a new band, a three-piece, sans a live drummer, Orange Disaster. They made the sublime, Something’s Got To Give. Five minutes of heartbroken bliss. An extraordinary record that sounds just as relevant today as it did back in 1980. A name change was next, with Architects Of Disaster seeing their line-up come and go till 1984 when The Perfect Disaster was formed. From there, a number of albums were released, while Phil Parfitt admits to being disillusioned with touring and personnel changes. By 2014, the solo album, I’m Not The Man I Used To Be was released under the moniker of Philip Parfitt. This brings us up to Mental Home Recordings by Philip Parfitt, released on October 30, 2020. Music archivists and simply lovers of good music will enjoy our conversation with Phil and the eclectic record choices he makes for the program.