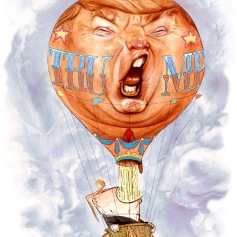 When the killing of Cecil the lion made headlines, Norman B immediately contacted Gareth Patterson

, the acclaimed authority on African wildlife. The resulting interview received numerous compliments, and generated a flood of requests to hear it again. Speaking from his home in South Africa, Gareth explains the truth about the luring of lions like Cecil, to be killed by trophy hunters and the fate of African wildlife. Gareth is a remarkable raconteur and his passion for the animals he knows so well makes for compelling listening. “We’re down to fifteen to twenty-thousand lions left on earth. To lose six hundred to seven hundred primarily male lions every year, purely because there are rich overseas people who want to get off on the thrill of a one-sided sport. It’s just disgusting!” Gareth says emotionally.

. Norman asked Steve to join the program as it became unnervingly apparent that Donald Trump was not fading from view in the GOP Presidential nomination race. For many onlookers, no matter what their political bias, the idea of Trump running for President was, if not bizarre, then kind of scary. Brodner

, already well versed in caricaturing Trump, was the perfect candidate to answer the question, “Could a caricature become President?” Brodner

tackles the premise astutely, as he remarks about drawing Trump, “You can easily envision the features of a rodent, rat, or some animal that spends it’s time in the dark, with huge teeth, creating damage and chaos.”

This week’s Hit That Never Was, fits right in with our Listener Request theme. We received two emails in the same week asking to hear the same song. It’s Andras Fox & Sui Zhen

, from Australia with Petit Morte.